Cara are hitting the peaks 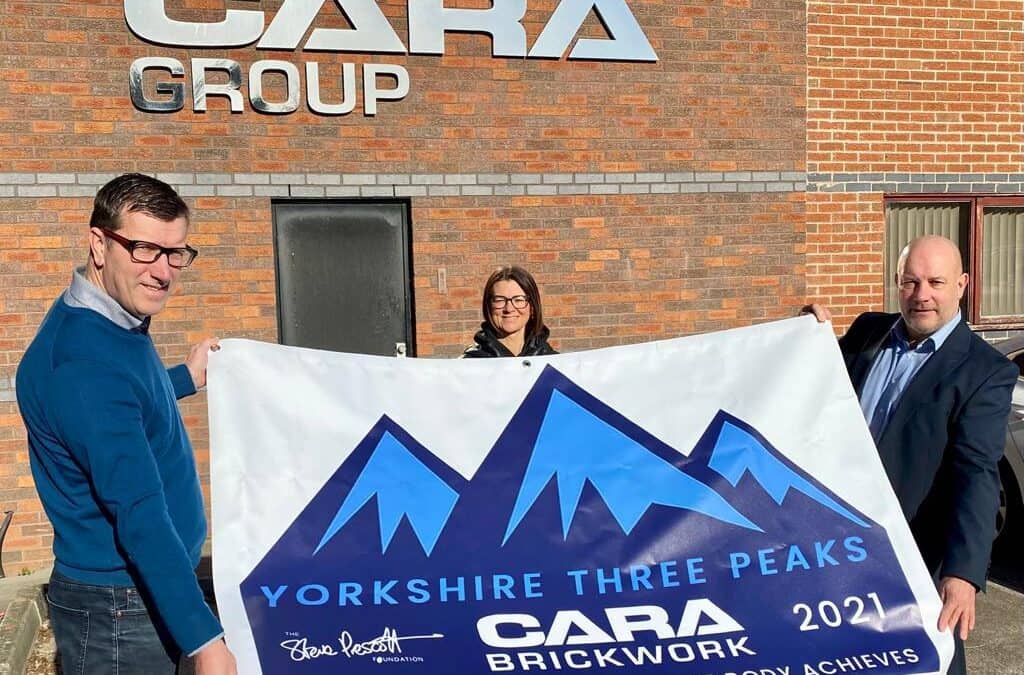 Cara are walking the Yorkshire 3 peaks

Many of you may know that Cara Brickwork have been long-time supporters of The Steve Prescott Foundation (I am currently doing the SPF 1,000 miles in a year walk).

We can officially announce that we are delighted that we are the main sponsors of the ‘Cara Brickwork Yorkshire Three Peaks’ raising funds for The Steve Prescott Foundation.

For those who did not know Steve – he played for St Helens Rugby Club (whom I’ve supported through the years). In September 2006, at the age of 32 Steve was diagnosed with Pseudomyxoma Peritonei (PMP) a rare form of Cancer and was told he would not see his children grow up.

Steve fought against the odds and whilst suffering with Cancer he did ‘challenges’ for charity which was recognised in him being awarded the MBE in 2009 for his work. Steve’s motto was ‘a challenge is not a challenge if it’s not challenging’. I was lucky to do one of these challenges with Steve in 2010 – a 15,000ft skydive.

Unfortunately, Steve died in 2013 but the SP foundation keeps on going year on year with new challenges to beat the year before (Kilimanjaro/Everest to say a few).

This iconic challenge will take place on the weekend of 25th to 27th June with the three peaks challenge starting on Saturday 26th June.

Martin Blondel from the SPF said, “It is fantastic that we continue to receive phenomenal support from Neil & Joey and the team at Cara Brickwork. Cara Brickwork was one of our first sponsors of the League at War Boxing event we staged at the Reebok Stadium in 2008. 13 years later they are still with us continuing the great man’s legacy. We look forward to seeing both Neil & Joey and the Cara Brickwork team tackle the Yorkshire Three Peaks along with our other great supporters.” https://www.steveprescottfoundation.co.uk/news/877-cara-brickwork-sponsor-yorkshire-three-peaks-2021-challenge

The Cara Brickwork Yorkshire Three Peaks has now reached capacity (over 250 people). All participants will be entertained by St Helens Band Polker and will be provided with a hog roast by the hosts for the weekend, The Dalesbridge Centre

It is hoped the event will raise in excess of £10,000 with vital funds donated to the SPF chosen beneficiaries The Christie and Rugby Benevolent Fund.

If you can spare a couple of quid that you usually spend on a coffee it would be greatly appreciated for such a worthy cause.